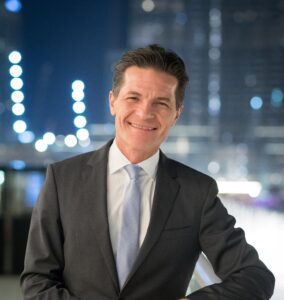 Olivier Harnisch is an international Hotelier with over 35 years of experience.  Until 2021, he held the position of Head of Hospitality at the Public Investment Fund of Saudi Arabia and was the founding CEO of the PIF Hotel Management Company in Riyadh. Previously, Olivier was CEO at Emaar Hospitality in Dubai. He started in the hospitality industry in 1986 in Nice, France. His career includes 4 years as COO of the Radisson Hotel Group and 14 years at Hilton where he was Managing Director for Northern and Central Europe.

Olivier is a Non-Executive Director and Board Member of various companies in Saudi Arabia and Bahrain. He holds an MSc in Organizational Behavior from the University of London, an MBA from Heriot-Watt University in Edinburgh and a Degree in Hospitality Management from the Berlin School of Hotel Administration. Having worked across the globe, Olivier Harnisch is fluent in six languages. He is also a passionate airplane pilot.